When I first watched the trailer of Rajkumar Hirani’s biopic Sanju, I was struck by a scene that probably was not meant to stand out as much as it did. A hysterical Ruby, a composite of Sanjay Dutt girlfriends (played by Sonam Kapoor), makes an appearance. She yells at Sanju, “Where’s the bloody mangalsutra?” while he dances around in his bathroom half-dressed and fully zonked out on some drug. Sanju had not showed up to his own wedding at the Registrar’s Office. He quickly puts a toilet seat around Ruby’s neck to placate her as one normally does in these situations.

In the film, the scene displays a lot more depth than just its sheer absurdity and we see Ruby break down in despair, a very appropriate reaction considering she has recently dumped her fiance in pursuit of a half-naked, toilet-seat-loving Sanju.

Although Ruby has every right to hate Sanju, she makes sure to tell his Jai-Veeru style best friend Kamli (Vicky Kaushal) before she leaves, “Don’t tell him what he did today. He’ll be very hurt.” And honestly, that sums up every character’s reaction to the train wreck that Sanju proudly calls his life. They coddle him and pick up after him in a sickeningly dutiful way.

When Sanju wants alcohol and wants it now, he knows he cannot depend on his father. This gives birth to the line that should appear on every Father’s Day Whatsapp forward, “Aur bhi daddy log hain duniya mein.” And he really proceeds to live that out with conviction, finding ‘daddys’ or high friends in high places (pun intended) to take care of his varying needs at every juncture. Despite this, while the caricatured Delhi Boy motto is “Jaanta nahi mera baap kaun hai?”, Sanju’s is “Dad ko mat batana,” famously uttered when he is snorting lines of cocaine at a strip club.

His journey from Pomeranian to Alsation, as he describes it, is hardly a journey, but rather an exercise in how to be a Bad Boy™ while deflecting the blame entirely onto the media. There is even a song during the end credits where the real Sanjay and Ranbir Kapoor tear up newspapers and complain about tabloids.

So why do we hate the bad boy trope? Let us recap.

The OG of Bollywood bad boys, based on consistency and impact alone, has to be Sallu bhai. (Notice how all the bad ‘boys’ acquire diminutive nicknames that remind us of sons and brothers?) From the infamous black buck case in 1998 to domestic violence and manslaughter, he really has done it all. In her essay, The Toxic Masculinity of Salman Khan, Nishita Jha deconstructs his life in the public sphere and remarks on how everyone in his life has had to be a Sallu apologist at some point, from his father Salim Khan to his biographer Jasim Khan. Sounds familiar?

Jha lists out the poor justifications for the blackbuck case, each weaker than the next, offered by Jasim, the author of Being Salman Khan. “Jasim Khan investigates the incident in some detail but finally decides the only thing bhai is really guilty of is his own bad boy image. Khan, the writer, offers up several theories to bolster Khan, the actor’s, innocence – Salman has Pashtun ancestors and hunting game is in his blood. The authorities wanted to make an example out of Salman and went after him with more enthusiasm than they had for an average poacher. The press blew up the story only because three of the five celebrities in the car were Muslim. Salman was actually “tricked” into poaching animals by a racket of wily tour guides and locals.” Everyone is to blame but Sallu.

The same boy-led-astray trope powers the Hirani movie. Sanjay’s history of drug abuse, violence and underworld connections lend themselves perfectly to this biopic whose sole intention is to evoke sympathy for what are really only the consequences of his own teenage rebellion that continues well into adulthood.  To jog your memory, he was arrested in 1993 under the Terrorist and Disruptive Activities (Prevention) Act and the Arms Act in connection with the 1993 Bombay blasts for illegal possession of a 9 mm pistol and an AK-56 rifle.

No character in this film, least of all Sunil Dutt, has any idea of the concept of tough love. They just ‘take care’ of this muscly man-child who flounders in the face of the consequences of his actions, even as he makes mistake after mistake. Sanju gets high when he is supposed to watch his mom dying of cancer at the hospital, befriends gangsters and hoards rifles, but when the consequences so much as threaten to appear, he blubbers incoherently while his father runs from pillar to post, trying to bail his son out.  No matter what trouble Sanju gets himself into, Kamli and Daddy calmly devise strategies to save him and resume singing old Hindi songs like nothing untoward has happened.

What Jasim’s biography of Salman and Sanju have in common is that they are both litanies of excuses for the bad behaviour of these entitled superstars, which seems to extend to all the bratty sons of MLAs and VIPs who run over police personnel, and think they are protagonists in a Vijay movie.

This lack of accountability and ‘boys will be boys’ mentality is what allows movies like Sanju to be lapped up by audiences as a sob story when it could just as well be the diary of a privileged brat from South Delhi.

Dutt’s two ex-wives are notably absent and two children inexplicably appear in the last scene. His sisters have no screen time or presence. Third and current wife, Manyata Dutt (Dia Mirza), says at one point in the movie as if he needs any more encouragement, “Bad decisions make for good stories.” Bumper sticker as narrative.

So Bollywood loves bad boys but what about the bad girls? Forget the fact that no female celebrities (that we know of) have ever dabbled in organised crime or domestic abuse but even the ‘notorious’ ones like Rakhi Sawant or Radhe Maa, the guru who was named in a dowry harassment case,  are never likely to be the subject matter of a touching biopic that celebrates both their chutzpah and their struggles. Would anyone, forget India’s answer to Walt Disney, Raju Hirani, make a biopic about a 60-year-old female actor with a questionable redemption arc?

As long as men are the primary players in the film industry, the assumption is that only violence and guns translate well onto screen. Female celebrities fall spectacularly short in that area. We must call out people who dedicate their time to documenting bad boys’ behaviour in the wild because of the trivialisation of violence and crime.

Recently, food writer Helen Rosner wrote about re-reading now-disgraced celebrity chef Mario Batali’s profile by Bill Buford.  “Heat a touchstone for food writers of my generation — is packed with other anecdotes that now seem troubling. Revisiting the book this week, I was appalled that my earlier self, reading Heat a decade ago, hadn’t even registered them as reason for concern. Batali says to a waitress at the same meal, “It’s not fair I have this view all to myself when you bend over. For dessert, would you take off your blouse for the others?”’ This among other anecdotes that the author and readers never lingered on before the multiple sexual harassment charges of 2017. 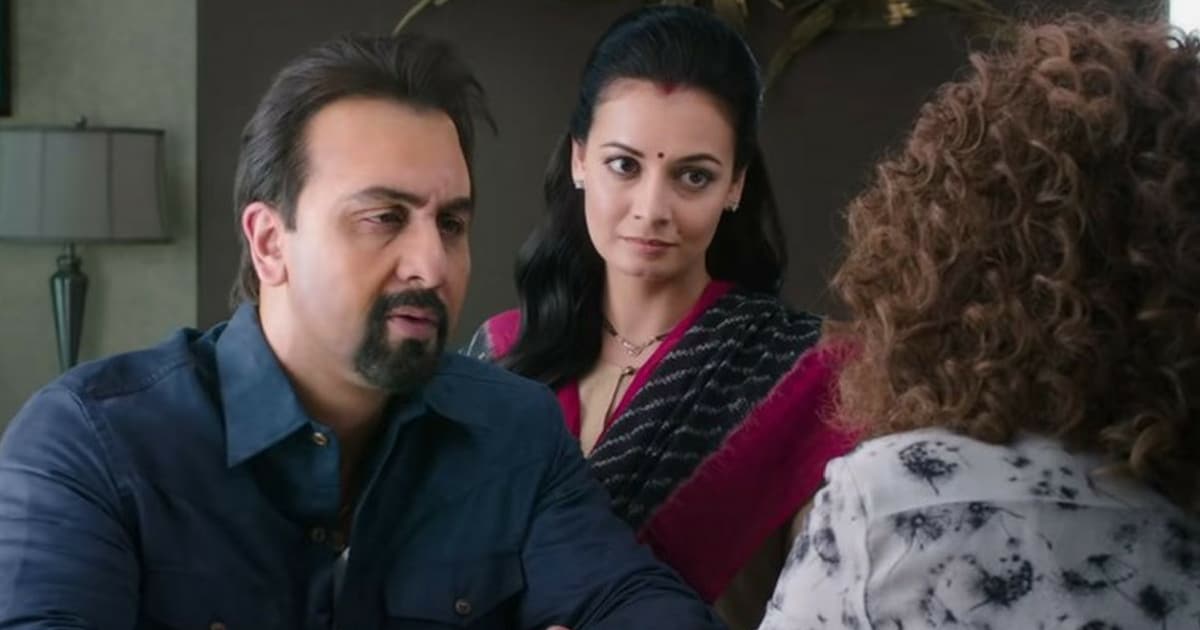 Ranbir Kapoor, Dia Mirza and Anushka Sharma in a still from Sanju

At large, Hirani does for Sanjay Dutt what Bill Buford did for Batali. Like Sanju in his drug induced haze, the film drifts in and out of coherence, glancing off issues of deeper significance and spending an insane amount of time on others that serve no other purpose but to stir our hearts aka manipulate our emotions. Two-thirds of the way through the film, you realise the extent of emotional manipulation you have succumbed to. Hirani has picked out the incidents in Dutt’s life that elicit the strongest emotional responses and highlights them in all their glory.

For instance, when the toilet of Sanju’s matchbox-sized jail floods and no one can hear his cries for help. Or when Sunil Dutt tells Sanju to hold his head high and wave goodbye to his gangster friends, he does so in what is set up to be a show of great defiance and filial love. But no one ever explains why he has multiple gangster friends in the first place and what he does for them.

In an interview with Reuters, Hirani said that Sanju had a hidden social message. We hope against hope that it was one advising society to not baby men who are perfectly capable of making sound decisions but choose not to, and to start holding them accountable to their mistakes instead. Instead we suspect it is for people to feel better about the irresponsible man-babies they have left at home to escape into the cozy feels of a Hirani Ever After.