Widely held belief is that the mystic poet was born in today’s Maharashtra, but many in Malnad claim he belongs to the region

To explore definitive archaeological evidences that may put an end to speculations regarding the birthplace of Purandara Dasa, hailed as father figure of Carnatic music, the Department of Archaeology, Heritage and Museums will soon commence field research work at Keshavapura in Araga Gram Panchayat (GP) of Tirthahalli taluk.

As ‘Purandara Vithala’ was the pen name of his compositions, it was widely believed that the mystic poet was born in Purandharagad, Maharashtra. However, many in Malnad claimed that he hailed from this region.

According to historians, Araga in Malnad was a buzzing commercial centre during the Vijayanagar rule, the period to which the poet belonged to. Referring to the names of the places in the vicinity of Keshavapura — Varthepura, Vithalanagundi, Dasanagadde, it was argued that these places were inhibited by merchant community influenced by Vaishnava tradition to which Purandara Dasa belonged. The late Patamakki Rathnakar, former MLA of Tirthahalli who had requested the State government to conduct research over the issue, had said that many words that figured in Purandara Dasa’s compositions were used by people in Malnad then in their day-to-day life.

Prior to his initiation to Haridasa tradition, Purandara Dasa was a rich merchant and was called as Srinivasa Nayaka. Referring to this, the proponents of the theory that Puranadara Dasa was born in Malnad point out at that ‘Nayaka’ title was attributed to locally influential people, including wealthy merchants in Malnad during the Vijayanagar rule. 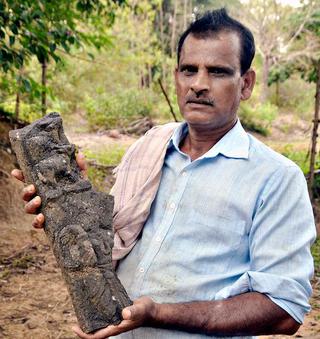 After visiting Keshavapura and surrounding places, the committee members had said that there was enough evidence to come to the conclusion that the devotional poet was born here. In its report, the committee had recommended for further research over the issue.

Following the submission of the report, people in Tirthahalli had demanded establishment of a study centre in Keshavapura on life and achievements of Purandara Dasa. S.G. Samakh, an archaeologist who was member of the team that took part in the excavation of the palace in Bada village of Haveri taluk where Kanaka Dasa, another saint poet was born, told The Hindu that, so far, based on literary evidence, it is being speculated that Purandara Dasa was born near Araga. However, definitive conclusions can be reached over the issue if we get tangible archaeological evidence like inscriptions, coins, remains of building related to the name Srinivasa Nayaka or Purandara Dasa.

Shejeshwara R., Assistant Director of department, said a team of archaeology experts would visit Araga and surrounding villages that have dilapidated monuments for preliminary field-level archaeological research work shortly. If need arises, excavation would be taken up in coming days, he added.